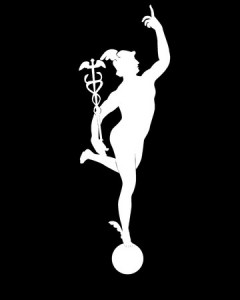 One of Astrology’s Well-known Stars!

Mercury retrograde is almost as well known as the Sun Signs as Astrology’s Murphy’s Law: if anything can go it will when Mercury is retrograde! Actually, as with all things mercurial, there are two sides to the story. Because Mercury represents the principle of mind, perhaps the retrograde period is a necessary and productive processing and re-thinking time. And if we keep that in mind going into the cycle, perhaps we’ll spend a little time re-addressing and closing things off rather than trying to push against the tide and start something. Really there’s nothing that can’t wait three weeks…

We now know that planets do not in fact go retrograde; it is an effect produced by the different speeds of the earth and the planet appearing to retrograde.

But astrology is a discipline of experience: what is actually seen from the surface of planet Earth. This perspective is embedded into our language. We do not say that the earth turns to the east so that the Sun comes into view. Instead we more simply say the Sun rises.

Mercury goes retrograde more than any other planet. The orbits of both Mercury and the Earth guarantee at least three and sometimes four Mercury retrograde cycles each year.

The stages of the Mercury retrograde cycle is as follows:

1) Mercury is direct meaning that it appears to be moving counter-clockwise through the signs of the zodiac. Only the Moon travels faster

2) Three weeks before Mercury goes backwards or retrograde, it enters that area of the zodiac it will retrograde over (its next Mercury Direct station). This is Mercury entering the “shadow” of the retrograde. From here on in, Mercury will be travelling the territory that it will cross three times: first direct, then retrograde, then direct again.

3) Three weeks pass, Mercury turns retrograde and the Mercury Retrograde station occurs. Mercury appears to stop in the sky and begins to go backwards. Mercury is travelling over territory that it travelled before going retrograde. This station begins the literal Mercury-is-retrograde stage.

4) Three weeks after that, Mercury reaches the position where it “entered the shadow”; here it stops and begins to move forward again. This is called the Mercury Direct station. The retrograde period ends but Mercury is considered to be in the shadow, called by some the “echo” stage because of the territory it still has to cross for the third time.

5) It takes another three week period for Mercury to return to the degree in which it turned retrograde, exiting the shadow.