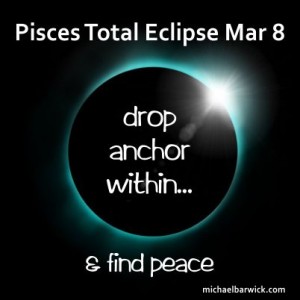 On March 8, two things of note happen. The Sun opposes Jupiter and the Sun is eclipsed by the Moon.

When planets oppose each other, they appear to us to be in opposite hemispheres. There’s a tug of war. Jupiter is the judging principle; the Sun is individual identity. There could be a lot of blaming, shaming and the finger wagging. Who truly has the moral high ground is the question. Best case is to establish balance between them. Worst case is over reach: personal inflation to the point that correction by others is required. It isn’t nice when they all turn against you.

And then the eclipse! Eclipses have very bad reputations in astrology. Trauma and drama is promised so it is said when the Sun is swallowed by darkness in a day sky. I think while they are happening, it’s more drama than trauma, but I’ve seen that they seem to sensitize places on the Zodiac wheel until the next solar eclipse, which will occur approximately 6 months later.

The March 8 Solar Eclipse opposite Jupiter suggests struggles over ideology. Jupiter is not himself being in Virgo. He’s trying to be detail-oriented when it’s completely not his strength. He’s better at understanding things at the 50,000 foot level. In Virgo, he can make the system and its processes the religion and will condemn from that perspective. An eclipsed Sun in Pisces is intense feeling without consciousness: it is animal instinct with the quality of a narcotic. It understands in a completely different way. So of course, it must be wrong to a Jupiter that is currently infatuated with practical applications.

There’s nothing practical about an eclipse. Harmonizing between it and Jupiter is a tall order: you have to balance the them consciously and respect their perspectives equally. Regardless of its drama with the other planets, it is in Pisces. The processes of the unconscious run close to the surface. Find ways to tap into it and the deep peace at the base of it.